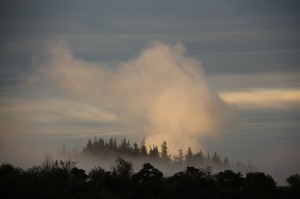 Nearly seven years ago I visited New Zealand for the first time. In a bit less than a month I travelled all around the country on both North and South Islands. A month may seem like a long time but it is not nearly long enough to see the whole of New Zealand (NZ). To everyone planning to go there, I would suggest to foresee at least 1,5 month: three weeks for the North and four weeks for the South Island. If not you will probably end up like me rushing through the country and constantly making mental notes “I have to come back here to do this and there to do that”. The reason why I chose to come back to NZ on this trip was precisely that: filling in the gaps, doing those things I didn’t get to do last time. With only 3 weeks and a pretty long list we would need to be quick and flexible. 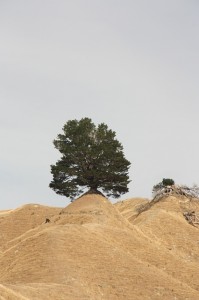 “You have not really seen green until you have been to NZ” was one of the things I had told Caro about NZ. I remembered that especially the North Island had been so green. All different shades but all green. But as our plane was descending I didn’t see much green. Rusty and brown prevailed. Also on our trip to our first destination: the Coromandel peninsula there was none of that flashy green to be found. Turns out that while Europe had one of its ‘worst’ winters in ages, NZ has had an extremely ‘good’ summer, breaking all record in sunshine and drought. Who said ‘climate change’ was all a lie? Here in NZ the past summer has launched the debate once again. 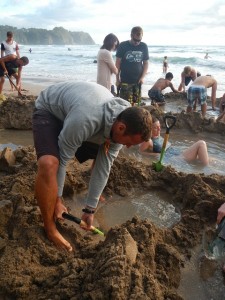 A first item on my ‘gap analysis’ (the list of things that I did not manage to do last time) was ’hot water beach’. As you probably know, New Zealand is one big display of the enormous forces of Mother Nature. On the North Island it is all about volcanoes and thermal activity. Hot water beach is a small stretch of beach on the Coromandel peninsula with a hot spring in the middle. The water is coming from deep beyond the surface where it is heated by magma. Every day at low tide people go over there to dig some pits in the sand and create themselves a hot water pool. Last time I missed the event due to very inconvenient low tide timings. In the middle of the night and at noon when I needed to catch the bus, but this time in the early morning we were on the beach (together with at least 50 other people) with a shovel digging our little hot tub. After our morning hot bath we went for a hike to the Cathedral Cove beach and I also put on my snorkelling gear for the underwater perspective. 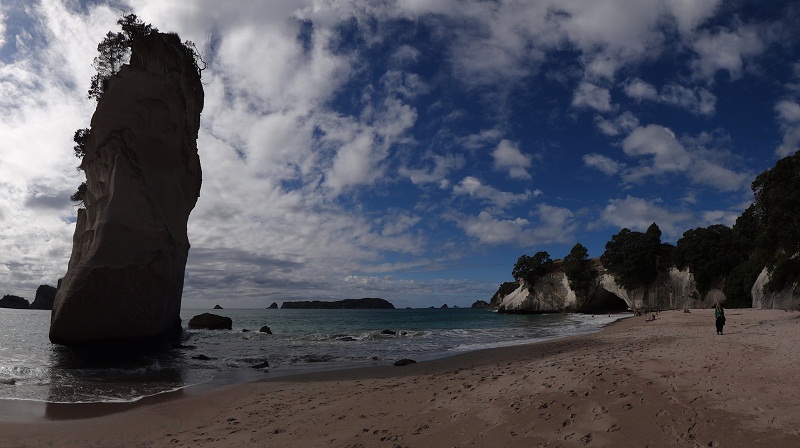 The fact that the water was not nearly as clear and definitely not as warm as the Polynesian seas, combined with rumours of great white sharks in the neighbourhood didn’t really keep me in the water for a long time. 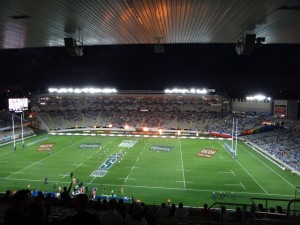 From the Coromandel we made our way back to Auckland tick off one of the most important ‘gaps’ on the list: ‘attend a rugby game’. I really learned to appreciate this game during my last passage in NZ. I found out about the rules by playing it on the beach and watching it on TV together with some real Kiwi rugby addicts. Ever since I’ve been hooked on the game. Unfortunately I was already too old to start to play it myself but it’s about the only sport I will watch on a regular basis as a spectator. As I learned about the game in the home of the famous and infamous ‘All Blacks’ (the NZ national rugby team), I was destined to become an ‘All Blacks’ fan. For those of you who have no idea about rugby, the ‘All Blacks’ are considered by most as the best rugby team in the world. Still it has been rather frustrating to be a fan. While they tend to completely destroy their adversaries in test matches where not much is at stake, they have a terrible reputation to fail when it really comes down to it at the big tournaments (i.e. the World Cup). If you haven’t witnessed it you can never understand the meaning this game has for the nation. Someone once told me that rugby is much like a religion in this country. I would say that it means even more. It is the most important element that keeps (the two main groups and cultures in) the country together. Both Maori and Paheka (white Kiwi) take great pride in their national team. 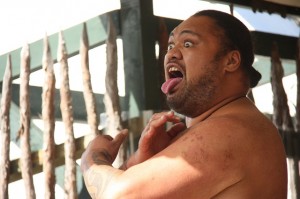 This is very clear in the ‘Haka’ ( Maori war dance) that is performed before each match. A typical Maori custom has been adopted by the whole country and is now probably one of the country’s most famous symbols. It’s a great sight to behold: While the massive All Black guys do their war dance, the other team does everything to avoid showing the fact that they are impressed. But the importance of rugby goes much further than that. When in the 80’s the rugby union decided to break the ‘anti-apartheid’ rules and accept an invitation from South Africa to play some matches, this caused a shockwave in the whole of NZ. Huge demonstrations and even riots broke out in major cities all over the country. The Maori population especially was enraged by this decision. Some say that it was this single event was the most important catalyst for the revival in Maori culture, customs and politcal awareness that can still be witnessed today. On the other hand the World Cup victory (finally!) in 2011 really lifted the spirit of the whole nation. A spirit that had been seriously tested in a year full of trouble and despair (2 earthquakes, a mining disaster and eco disaster with a containership)..

Unfortunately while we were around there were no ‘All Blacks’ games. However the next best thing was seeing All Blacks players play against each other. We went to see a game in Auckland of two of the biggest NZ teams (Blues against Highlanders) and saw a lot of All Blacks players in both teams, including my personal favourite: ‘bad boy’ Ma’a Nonu. I dragged Caroline along and we got lucky to see quite a spectacular match. 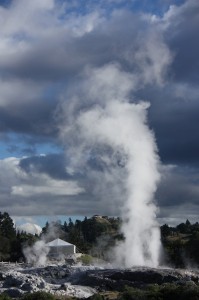 The next morning we were off to Rotorua. Rotorua is known for the thermal activity (geysers, boiling mud pools all over) but also as one the ‘Maori culture hot spots’. After our time in Polynesia it was very interesting to compare both cultures. Remember the Maori in New Zealand descent from the same forefathers as the current day Polynesian Islanders. The language and a lot of the customs (Haka and other dances) are very similar but the Maori culture is still quite different. It is probably also more authentic as unlike Polynesia where the culture was nearly completely erased by diseases and Christian missionaries, the Maori have always stood their ground and kept their culture alive against the odds. 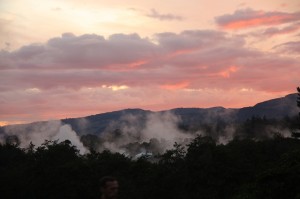 Next point on the list: “Tongariro Crossing”. In the top 10 of the world’s best day hikes this hike on and between the craters of the Tongariro National Park is high on every outdoor enthusiast coming to NZ. During my previous trip I went to the park 2 times and  had been unlucky with the weather both times. The first time we didn’t even start the hike. The second time I actually completed the hike but was in pretty severe weather (a blizzard) most of the hike and I did not see anything of the spectacular scenery. This time I was checking the forecasts constantly and we had our own car so we were flexible. We were actually planning some more time in Rotorua and Taupo to see some more of the thermal activity when I noticed the forecasts for the next days started to deteriorate. We decided that same evening to drop our plans for the next day and instead make a bee line for the volcano. The next morning at 6 am we were in our car driving through some of the most gorgeous scenery I have ever seen. Gentle green hills and forests with steam coming from hot pools and geysers rising to the sky getting nice pink, red and orange colours in the rising sun. Even though we were in a hurry to get to the mountains we stopped the car a couple of times to enjoy the scenery. 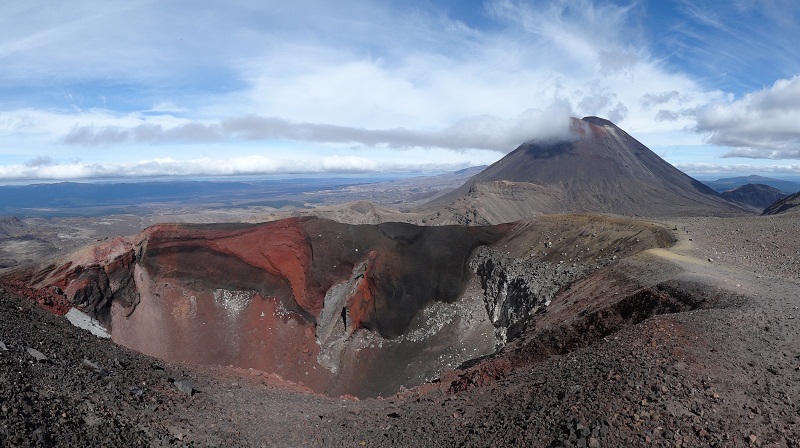 By 9 am we were at the park and could start our ascent. Unfortunately as the car park was already full we had to walk another 7km from the highway  to the start of the trail (35$ for a 7 km bus ride seemed really exaggerated to us). This time even though we could not do the complete ‘crossing’ due to volcanic hazards in the last part of the hike, I finally got to see the incredible scenery. As you can see in the pictures, it was definitely worth coming back for. The Lord Of The Rings fans will surely recognize Mt. Doom on there. 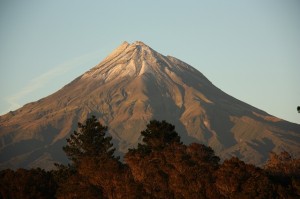 From Tongariro we had planned to go straight  to New Plymouth and that other volcano on my list: Mt. Taranaki, but with a day to spare (and bad weather prediction) we made it a two day scenic drive through the Whanganui area to New Plymouth. I had wanted to visit New Plymouth on my last trip not only to climb the volcano but also to visit Kim and Harvey, the two Kiwi’s that were with me on the bus that crashed in Burma in March 2006. I really wanted to drop by this time but unfortunately I have not been able to contact them. We hadn’t been in contact for some time and all I had was an email address. When I wrote them a couple of months ago, my mail bounced back saying the address was no longer valid. A real pity because they were really cool people. A lesson learned that even in these internet dominated times a real physical address is good to keep as a contact detail. 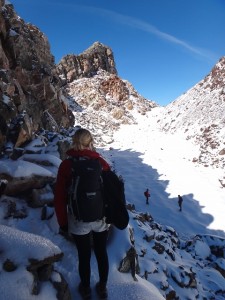 On our last day on the North Island the weather around the Taranaki volcano cleared out and we were off for another sunrise start of a nice hike. As it had been storming the day before on the summit there was a nice little coat of snow on there, making it look a lot like the iconic Mt Fuji in Japan. Actually Mt Taranaki has featured as Mt Fuji in the movie ‘the last samurai’ with Tom Cruise from some time ago. It was a pretty demanding climb with a lot of small scree to work our way through. Near the top the scree was replaced by big rocks covered in snow and ice making it a bit tricky to climb. 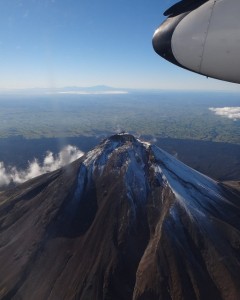 The views made up for the hard climb, we could see a large part of the North Island including the volcanoes of Tongariro where we were just three days earlier. Eventually we climbed into the crater of this dormant volcano. As we walked on a glacier through the crater to the other side, there were views of the South Island. On our flight to the South Island the next day, we actually got a nice surprise when the plane flew right over the crater so we could spot the place where we had been standing the day before, adding another perspective to our Taranaki experience.

8 thoughts on “Back in the land of the Kiwi’s: The North”