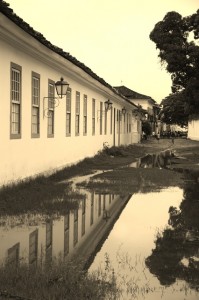 The local summer is not the best period to travel in Southern Brazil climate wise. There is often a lot of rain we were told. We had been very lucky to have 4 days of beautiful weather while we were in Rio. Last year it had been raining all night on New Year’s Eve and there have even been years where a great part of the fireworks could not be seen because they exploded above the clouds. While we drove down the coast from Rio, the beaches were packed with Brazilian holidaymakers and also our first afternoon in the town of Paraty had been very hot and sunny. In the evening however we saw the first thunder clouds appear.

The next day it rained non-stop and by the evening the streets of the town looked more like little canals than actual streets. We didn’t really mind as we could use a break after the hectic pre departure days at home and the busy days in Rio. It would have been nice to lie on the beach but a hammock on the porch of the hostel was nearly as nice. When the next day the weather hadn’t changed, we decided to adapt our plans slightly. No use going to one of the gorgeous beaches around so we went into town in the morning and afterwards went inland to the ‘jungle’ to check out some waterfalls.  One of these waterfalls  (‘Cachoeira Tobogan’) is actually a natural waterslide. The slick rock faces allows you to slide down the waterfall (fast!) before plunging in a small pool at the bottom. Good fun on a rainy day! Have a look at our little movie. 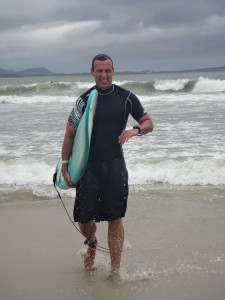 As the rainy weather would continue for at least 5 more days, it was no use for hanging around longer so we decided to start making our way down south. We’ll come back here sometime later to check out the beautiful beaches and bays. Getting in Paraty was easy, getting out was a bit more difficult. The town had been packed for New Year’s Eve but now most Brazilians wanted to get back to the cities to start working again the next week so all busses were booked full for days. Eventually we managed to get to Sao Paulo via another city. From there a night bus would take us to the island of Florianopolis. The first part of the bus ride had been in torrential rains. I actually got drenched inside the bus as the water was leaking through the roof. During our stopover in Sao Paulo the weather had been pretty nice all afternoon so we were hoping that we had escaped the bad weather. Unfortunately when we woke up on the bus the next morning, it was pouring down again and according to the weather forecast, there was just more rain waiting for us.  Fortunately we hadn’t just come to Florianopolis for the beaches but mainly because we wanted to surf for a couple of days. Ever since I took a surf camp in Portugal a couple of years ago, we try to get some (wave) surfing into our travels wherever we can. The good thing about surfing is that you don’t really need the sun as long as the winds and ‘swell’ are good. And both were just that. We had a great couple of days on the waves and the weather actually turned out a lot better than predicted.

Next was another night bus to the great waterfalls of Iguazu on the border between Argentina and Brazil. Same story again… we leave sunny Florianopolis and wake up next morning on a bus stuck in traffic due to more heavy rain. While I had been rather disappointed by the (dry season) volumes of water at Victoria Falls in Zimbabwe/Zambia, this time I would not be disappointed. 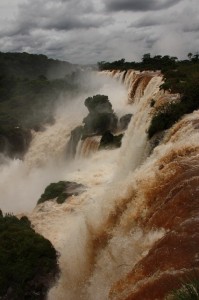 It had been raining for more than a week in the region so all the rivers were swollen and the falls were truly impressive. As at Victoria Falls both countries give a different perspective on the falls and both have their own National Park…and steep entrance fee! The Brazil side offers a nice overview of the falls but personally I was a lot more impressed by the Argentinian side where you can get a lot closer (both under and at the top) to the falls.

From Rio to the border at Iguazu in under two weeks…It’s been a short and fast trip through Brazil but we really liked our time there. This country is just booming. Only 15-20 years ago it was considered a third world country with a political reputation that was only marginally better than its neighbours Argentina and Chile . But under the former president Luis ‘Lula’ Da Silva the country made the big leap forward. In 2005 the country paid back its 15 billion dollar debt to the IMF ahead of schedule and on top of that, a year later an enormous oil reserve was discovered off its shores.  Now 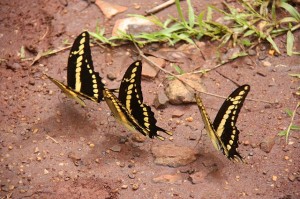 day it is one of the famous ‘BRIC’ countries, the four countries that are considered to become the dominant economies by 2050. Even though I had heard a lot of stories on how ‘developed’ the country was, it is still impressive to see how this country is growing. Of course it is suffering from some serious ‘growing pains’. We witnessed two black outs in two days in Paraty where the electricity distribution is just not ready to cope with the demand of the fast growing middle and upper class. Another issue, and to me the biggest challenge for Brazil will be to bridge the gap that still exists between the country’s poorest and the exploding middle (and upper) class. In the last decade the percentage of people in poverty went down from 20 to 10 % of the population, but it remains one of the issues that worries the country most.

Just like when I was in China a couple of years ago, during our time in Brazil, I could really see, hear and feel how these so called BRIC countries are catching up with ‘the West’ really fast. And it won’t take long before they will be looking at us from their rear view mirrors. If you think Chinese is too hard to study, I suggest a  (Brazilian) Portuguese course…and if you want to be guaranteed a (very well paid) job in Brazil, just get yourself a licence to fly helicopters. Apparently in some cities (e.g. Sao Paulo) ‘private helicopter pilots’ for the ‘nouveau riche’ are currently the most sought profile.

4 thoughts on “Testing the water in Southern Brazil”