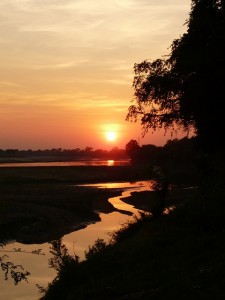 It was about half past midnight on our first night in South Luangwa NP when I woke up because something was brushing against my safari tent and judging by the sound of its footsteps it was something big…without making any noise I had a look out of one of ‘windows’ of the tent and saw that a 3000 kg heavy hippo was grazing right next to my tent.

For those of you that are not very familiar with Africa and its fauna, a hippo might seem like a funny and clumsy animal. But each year this animal kills more people than any other animal on the continent. In fact these animals panic very easily and will charge when feeling even the least bit threatened. Getting between a hippo and the water (its safety) is often fatal as this 3,5 ton heavy animal will just run right over you. There are even cases known where a hippo destroyed a whole camp in its flight towards the water. And don’t even think about outrunning it. With a top speed of more than 40 km/hr., not even Usain Bolt would be able to outrun this animal.  During the day they laze in the rivers and pools but at night 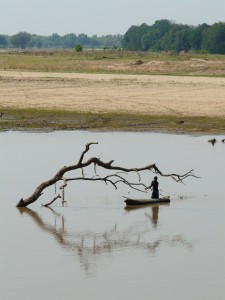 they get on land to graze and that’s when tourists that are stumbling to the toilets in the complete dark, find a hippo on their path. We had received an extensive safety briefing from the safari guide. We had to call for ‘help’ each time we needed to go the toilet after dusk. A guard would then accompany us to the toilets. And if we heard anything around our tent we should lay still and make no noise at all. As there no fences at all, not only hippos but also elephants and big cats could wander around the camp.

With all this in mind I was looking at this huge animal that was grazing away all the grass around my tent in the middle of the night. That was the closest I came to one of the big mammals in Africa so far and our safari had not even started. 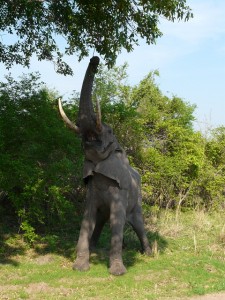 South Luangwa is quite different from the plains of the Masai Mara that we visited earlier on.  As the first rains had arrived the weeks before and drinking pools had formed all over the park, the animals were scattered around the park and as such a lot more difficult to spot. On the other hand there was an explosion of fresh green colours on the trees and in the grass.

Elephants and giraffes were all over the place and they were not really shy. When we were observing two very big bull elephants, one of them came straight to our vehicle. Our guide was whispering “no sounds! No movement”, so we all froze.  The elephant came up to within a couple of meters of the car and then turned and continued past us to the other side of the road. We kept observing it while it was feeding right next to us. That’s when one of the girls in the car got an uncontrolled coughing fit … All of a sudden the elephant that had not noticed us at all so far, realized we were there. It came a bit closer, but then turned away again to continue feeding. Feeding takes up most of an elephants day as they need to consume about 300 kg of food every day. 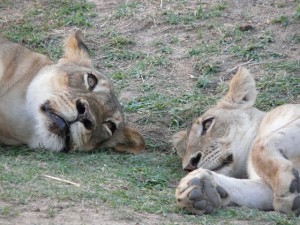 Apart from the elephants and giraffes there were the other usual suspects: zebra, impala, warthogs, etc. On the first afternoon drive we got lucky and got to see a pride of lions. Always interesting, but there was a little surprise this time. They had just eaten and were all lying flat on the ground and hardly noticed us. As they were close by the road we got really near to them and were looking at the male, two lionesses and a cub just 5m away. But just when we wanted to leave out of a very small ditch a 5th lioness appeared…we had been looking at these lions for 15 minutes but no one  of us (not even the guide) had noticed this 5th lion that was right before our eyes observing us. Scary thought.

All though the park is known for a large concentration of leopards, we were not able to spot one not even during the night drives. They really are like ghosts in the bush in Africa, they are all around but hardly anyone spots them. 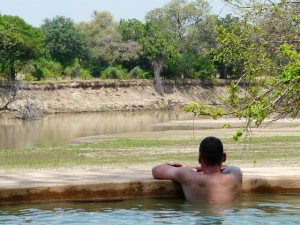 The safari camp we were staying at was amazing, overlooking the river that is the border of the park it allowed us to do wildlife watching from the swimming pool.  In the morning we got treated to the typical African sunrises that we all know from pictures or movies.

After the safari, I moved on to the capital of Lusaka. The capital itself does not really have any real attractions but it’s a relaxed city perfect to recharge those batteries. I had another mission. I needed to find at least one other person to join me on canoe safari on the lower Zambezi river. While making my way down to Zambia, I had been checking with travellers for a couple of weeks but nobody seemed to be interested or able to do it. Most people just wanted to get to Victoria Falls for partying and then on to Botswana and Namibia as fast as possible.  During my stay in Lusaka I basically asked every person entering the hostel. After 3 days, just when I started to lose hope, I met Malcolm, a very cool Dutch man who had 4 days left before flying home and wanted to see just one elephant. The canoe safari would turn out to be the most memorable thing I’ve ever done in Africa. It made all other safaris look very pale! You will read all about it my next post. 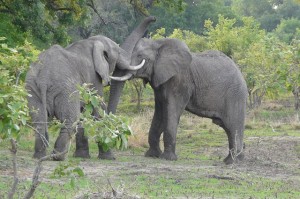 Zambia has been quite a change from Malawi. The country is actually pretty rich; the Copper belt region being the most important factor. We saw truck after truck loaded with copper driving towards South Africa.  But apart from copper, there is also gold and other precious metals. Unfortunately as with most other mineral rich countries in Africa, the wealth is not really managed very well. Western countries and China  are given concessions at terms that ensure richness for the persons (government administrators)that award the concessions but do not or hardly generate any income (via taxes) for the country as a whole. ‘Special Economic Zones’ are created, where mainly Chinese but also other countries can suck the minerals away ,while hardly generating any employment for local people and not paying taxes at all. The Chinese have gotten a real bad reputation with a lot of locals. However I was talking with a US expat working in this business and he said that US and EU countries are just as bad. The only difference is that the Chinese are open and honest about it.

The result of all this is that prices of daily live in Zambia are very similar to prices in Europe however a big part of the (mostly rural) population has an average income of around 80$ per month and are struggling to survive.  This then almost obliges them to poach whatever animal they can get to get some food on the table. 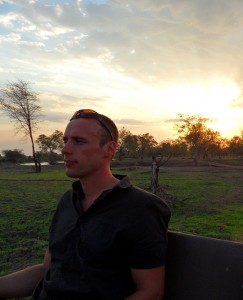 On the ‘bright’ side, the mineral richness assures quite a bit of foreign aid. The deal is always ‘quid pro quo’. We give them aid and in return our companies get favourable conditions for their local subsidiaries or are given lucrative ‘aid projects’. I have however talked to a number of Zambians that work on ‘sustainable projects’ to stop the deforestation, for wildlife protection or for creation of  aids awareness. Compared to Malawi the country seems to be in much better shape.

While in Europe temperatures are going down rapidly, out here it is the height of the hot season and people are praying for the rains that should come anytime now.