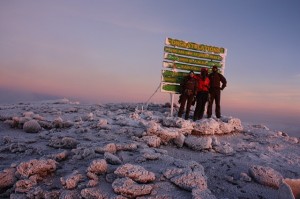 When we were planning this trip we had been looking at the possibility to check out the gorilla’s in Rwanda and cross the border into Congo to climb the Nyiragongo volcano. However a new rebellion in the Kivu earlier this year, meant that Congo again became off limit and we had to change our plans. Mount Kilimanjaro (Mt K.) was the obvious back up solution. With 5895m Mt K is the highest mountain in Africa and one of the famous ‘7 summits’.

A mountain of this height should not be taken lightly. Not only are there the usual dangers of an alpine environment but also the danger of getting ‘alltitude sickness’ is very real. For those that are not familiar with this condition, I try to give a very short introduction. Basically the reduced amount of oxygen in the air does not only make it harder to breath but also has a number of other effects on the human body (a.o. severe headaches, nausea, fatigue, dizziness and problems with balance). The biggest danger is that the body starts to build up fluids in the brains (cerebral oedema) or lungs (pulmonary oedema), both of which can have fatal consequences (every year several people die hiking in Nepal). If the symptoms get severe the only solution is (fast) descent. Often all symptoms disappear after descending just a couple of hundred meters. Having made a midnight emergency descent with one of the participants in my group in Nepal, I am very aware of the danger of this condition.

There is only one way to avoid ‘alltitude sickness’ and that is to allow your body to acclimatize to the altitude. This acclimatization process is different from person to person.  Even for one given person it can differ greatly from year to year. One thing is for sure it does not have anything to do with ‘being in shape’ and so it can not be trained. As a matter of effect some studies show that endurance athletes (e.g. marathon runners) have more problems than the average couch potatoe. To acclimatize there are only two things to do: ascend gradually and drink a lot! The gradual ascent however is a bit of an issue on Kilimanjaro as the trips that are being sold are between 5 and 6 days treks (which means being at the top after 4 or 5 days). In the Himalaya trekkings I did in the past it usually takes 10 or more days to get to an altitude of 5000m. 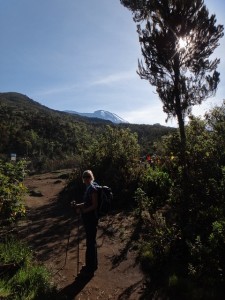 We chose the Machame route as this is considered one of the best for acclimatization as the ascent is gradual until the basecamp at 4500 m after which a midnight ‘hit and run’ mission is launched for the summit. A ’snail race’ as I like to call: the pace is extremely slow to avoid to burn out but still the whole mission (up and down) needs to be done in 7-9 hours.  So before the altitude sickness has the time to kick in you are already back at 4500 m.

So in 6 days we would be try to get to the summit and back. The first day is an easy walk through the rainforest to get the first camp at 3000m, where popcorn and hot drinks and very nice dinner await. Day two is already more challenging because of the height (camp at 3800m) and is the first crucial day for acclimatization so we were hydrating ourselves till we almost burst. We drank about 4 liters /day each. If you drink that much the water has to go somewhere and I believe that I broke my personal record with 22 visits to the toilet in 24hrs of which 5 during the night. You should know that during the night it was freezing outside and in our tent it was not much warmer than 5° either so getting out of a warm sleeping bag because nature calls is not really comfortable to say the least. But the more you have to go…the better you acclimatize; so I was doing really well. Caro had a bit lower ‘score’ but still passed the acclimatization test very well. The next day was a specific acclimatization exercise where we walked to 4500 m to have lunch before ending up at a camp at 3900m. A slight headache for the both of us but things were still looking good. 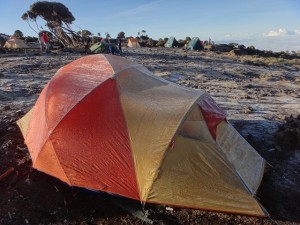 However during the preparations we had been very focussed on the altitude but we started to discover another major factor in the game: the cold! We knew that it would be cold at the summit in the early morning but did not expect it to get this cold at this altitude at this time of the day. Actually the weather was more or less the same all 6 days. From 6am to about 9am there would be a clear sky and we would get very hot, hiking in the early morning sun. But around 8.30 the clouds from the lower areas started to move up quickly and by 9.30 we would be in the middle of the clouds. This did not only obscure all views of the mountain but it also brought bitter cold winds. At that moment we had still between 3 and 5 hrs walking to do which were not the most enjoyable before we would take shelter in our tents (and sleeping bags) until sunset (6pm) when the clouds within 10 minutes disappeared and we would get a glimpse of the area where we were camping before total darkness and thousands of stars would take over.  At night it usually the sky was clear so the temperature plummeted below zero (our tent was frozen solid each night). 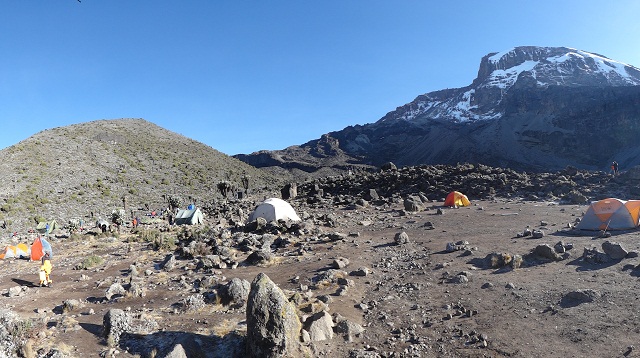 The 4th day was a lot longer than expected from 3900 to basecamp at 4600 m over a couple of ridges. Between the actual number of meters ascended was a lot more than the difference between the 2 camps as there was a lot of going up and down. Moreover the sun lost the battle with the clouds very early in the day so we were walking about 7hrs in the cold wind before reaching the basecamp at 4 pm. That same night we would attempt to reach the summit. The climb would start at midnight and we should arrive on the summit by 6pm for sunrise. So we had very little time to recuperate from a long and cold day. We had a small ‘pasta party’ and by 6.30 pm we were trying to get a sleep. Unfortunately the wind had picked up a lot and it seemed like our tent would be blown away each minute so it would prove very hard to catch some sleep. Eventually we had both slept about 2 hours when our guide told us to get ready around 11.15pm.  Actually until that moment we were both convinced that the summit attempt would be cancelled because of the weather. But it was a ’go’.

As soon as we got out of the tent we knew that this was going to be a very tough nut to crack. The wind was ice cold and within 10 minutes my hands were feeling numb from the cold (I confess my gloves were definitely not adequate for this climb). Apart from the cold it was the perspective of having to walk 6 hours in the complete dark with no visual indication of how far we had come and how far we still had to go. The only thing I could measure was the altitude.

Luckily after some more time and with some hand warm exercises we had come up with the days before I was able to get my hands warm again and the first 2 hrs were not too bad. I could see that we were climbing fast and the path we walked was sheltered from the worst winds. Not for long though because between 2 am and 3 am we got the winds full on again and afterwards (there was not much talking during the ascent) we found out that this time was for the both of us the most difficult part of the climb. Only halfway in time, my hands frozen and still not the least indication that we were getting nearer to our goal…only complete darkness and cold winds. The temperatures I measured were around -10 to -15 but the wind chill made it really feel like Siberia.  I must admit, I was about to crack. Mister ‘I can stand the cold pretty well and I want to go live up North’ was nearly getting beat by Africa at his own game.

I had to put away my walking sticks to put my hands in my pockets to ‘defreeze’ them a little bit. Our guides made an exception to their rule of ‘no breaks’ (remember the snail race) when we were staggering about a bit too much.  We ate some power food (nut mix) that we had brought all the way from home for these moments and struggled on. Time did not seem to pass and even though we had the impression that we were climbing vertical walls the altitude on my watch did not seem to agree.

Somehow we made it through…around 4.30 for the first time since midnight I could see (still high above us) a point of recognition; ‘Stella point’ on the crater rim, which is another hour away from the summit. Finally some hope… so we kept staggering on.  By 5pm we had reached ‘Stella point’ and we could see a first bit of glow on the horizon. It would be another hour before sunrise and we still had about 250 vertical meters to climb. But the views that we were getting with the slow return of the light were  amazing: to the left, the last remaining glaciers of Mt K and to the right its crater and all this cover in a layer of fresh snow of the night. By 5.50 we were at the summit as the first climbers of the day. Our assistant guide was very proud to inaugurate the board marking the summit by using a glove on one of our walking sticks. 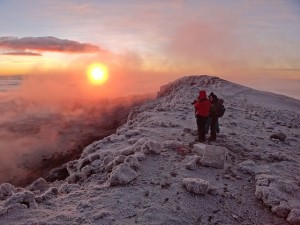 Only a couple of minutes later the sun rose above the horizon offering us a truly amazing show. No words can describe what we got to see. And what’s more it seemed that with every minute the sun was up, the temperatures were increasing. I don’t think I have ever been that happy to see the sun rise. 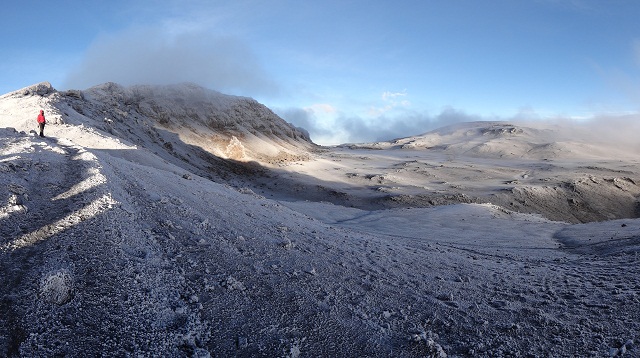 We took about 20 minutes on the summit, 15 minutes longer than the 5 minutes that the guide had scheduled before we started part 2 of this gruelling expedition: a descent from 5895 to the next camp at 3100m only interrupted for breakfast and a 1hr nap/clean up in basecamp. Extreme torture for people with already bad knees like ourselves. By 2pm we were finally at the camp and very happy that it was almost over. The last day was a non event as we spent the last two hours walking down thinking about showers, a hotel bed, fresh fruit juices and a great Indian restaurant.