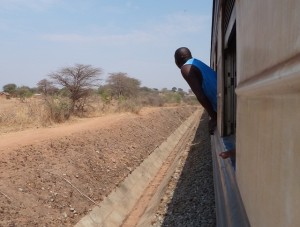 The Tazara train line is a bit of an icon for ‘train aficionados’. It was built by the Chinese under Mao at the time disastrous cultural revolution. As a demonstration of ‘international solidarity’ and in support of the ‘independent socialistic republic of Tanzania’, the Chinese built a railway line across Tanzania and way into Zambia. Today you still find the typical Chinese railway station buildings (that I have seen earlier in several towns in China) in the middle of the African bush.  Also the trains that are used today are still the same trains of more than 40 years ago (including instructions in Chinese). These days the train only runs twice a week and it is slow! It takes 24hrs to get to Mbeya near the border with Malawi (instead of 12hrs by bus) and delays of 24 hours or more are very common. Still it is nearly always fully booked by both foreign as local travellers. 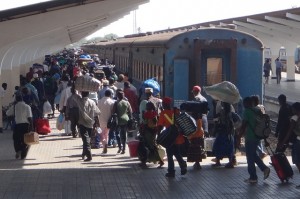 As I like to travel on trains (I do it every day at home) and definitely wanted to avoid another long bus ride, this seemed like a good idea. Getting a ticket or a reservation would prove to be not that easy as they are only sold at the station that is 8km outside of Dar Es Salaam. Eventually I found out that it was possible to send an SMS to certain number with the details of the reservation. Miraculously it worked,  when I arrived at the station a couple of hours before departure, they found my reservation and  I got a ticket.

The ride was very nice. We more or less stuck to the schedule so we passed through the wildparks in the south (Selous) mostly during the night, so unfortunately we did not see many big animals. I did spot some impala and zebra along the way. But much more than being a ‘game drive’, this train ride gives a nice idea of the daily live in some of the remote areas of the country.  You get to see women queuing to get water in the morning, the boys herding the cattle and the men lying in th shade… Unlike a trip on a road, on a train you get the opportunity to see behind the screens & facades and in the backyard of some 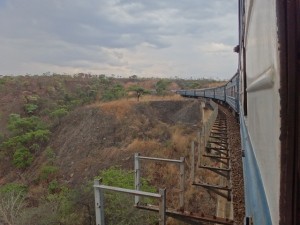 villages.  As the train only passes about 2 times a week and given that some of these villages are really isolated from the rest of the country, it still is a bit of  an ‘event’ for the people and especially for the kids. In some of the villages, what seemed like the whole population under 10 years old came running out to greet the passengers on the train.

The 24 hours on the train were a really nice experience! And I actually slept very good despite the fact that it can get really bumpy.

The next part of the journey to Malawi was again a lot less fun. A full day with two taxis and three busses and one last Tanzanian (money changing) scam left us again exhausted. Luckily I was able to do this trip together with a  couple of cool guys that I had met in the train station in Dar Es Salaam, but I definitely do miss my ‘partner in crime’!

Somehow all of us were glad to be out of Tanzania and are looking forward to see what Malawi will bring.

One thought on “Getting to Malawi on the Tazara train”